Happy Halloween!! Are you headed to a party and in need of some fall snack inspiration? Or three ideas? Something relatively easy but crowd-pleasing? This was my dilemma last week. Between Google and Pinterest I had approximately 3 trillion recipe inspirations but none of them jumped out at me. Instead my eyes were assaulted by the thousands of candycorn turkeys.

I was craving homemade butterscotch, but also wanted something savory and absolutely involving cheese. Then again, do I ever not want cheese?

Thank goodness I finally found some inspiration and had way too much fun pairing apple varieties with three styles of snack toppings.

Are you thinking right now, what is the difference between butterscotch and caramel? Well I’m glad you asked. Deb Perelman has a great answer to that question. 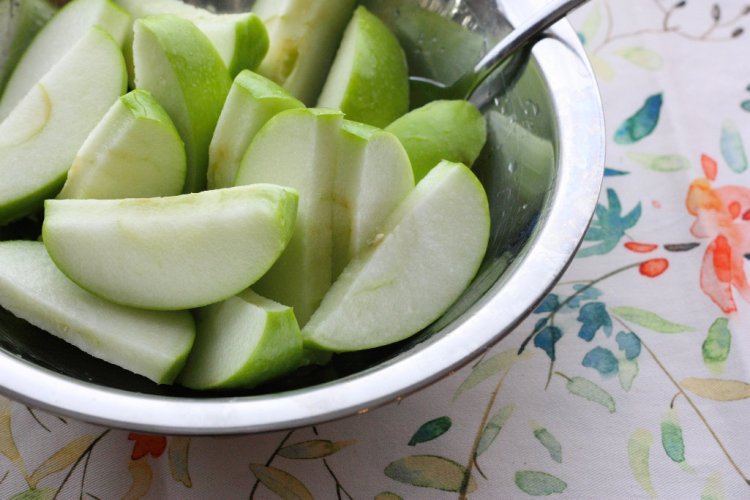 Butterscotch bites: Melt butter in a medium-sized saucepan over medium heat. When melted, add sugar, cream, and salt. Whisk until well combined. Bring to a gentle boil for 5 minutes, careful not to burn and whisking frequently. After 5 minutes, remove from heat and add vanilla and 1/2 teaspoon salt (I ended up using 3/4 teaspoon salt, but taste for yourself after adding only 1/2 teaspoon, and see if you want to add more). Put butterscotch in refrigerator for about 1 hour before assembling apple bites.

Place your graham crackers in a ziplock bag and roll with a rolling pin until they become a sandy powder. Then dump in 1 teaspoon cinnamon and give the bag a good shake. Feel free to add more cinnamon as desired. Next, cut the apple into slices, about 16th’s. Then cut each slice width-wise so you have bite sized pieces. Toss slices in a bowl with the lemon juice.

To assemble, spoon a nickel sized amount of butterscotch on each apple slice. Sprinkle with cinnamon graham mixture and spear each piece with a toothpick.

Bacon bites:  Fry or bake your bacon to desired crispy-ness, careful not to burn or overcook as bacon can crumble when speared by a toothpick. Set aside. Cut apple into slices, approximately 8ths, then cut each slice width-wise.  In a medium bowl toss apple chunks with lemon juice. Cut your cheddar cheese into 16 equal slices/pieces.

Assemble by layering the apple pieces with cheese, then about 1/3rd of a bacon strip (making sure you will end up with enough bacon for all the bites). Spear each piece with a toothpick (I found that it was easiest to spear the bacon through the fattier portions). When assembled, dust generously with smoked paprika.

Assemble by layering apple pieces with cheese and then adding about 1/2 teaspoon fig jam. Spear apple bites with toothpicks before adding your mint (otherwise mint will “sink into” the jam and cheese when speared by toothpick). Garnish with mint leaves.